The rout in oil markets continued in November, the markets worst month in 10 years. Oil prices West Texas Intermediate (WTI) down by 22%, to their lowest level in 13 months. In the past few months, oil markets have moved from balanced to oversupply, which sent oil prices (Brent) crashing by one-third from a high of $86/bbl at the beginning of October to under $60/bbl at the end of November.

While a softening of demand (in particular from China) has been a factor in the price rout, the main issues have been geo-political.  In the run-up to the imposition of U.S. sanctions on Iranian oil exports (the Trump administration stated that it wanted to drive Iran’s exports to zero), OPEC, led by the Saudis, ramped up production by 1.5 millions of   barrels per day (mbd) between its May 2018 low point and an October high of 33.3 mbd.  Saudi Arabia contributed to half of that increase, bringing its output to 10.6 mbd in October, from a 2018 low of 9.86 mbd in March.  Furthermore, while OPEC cut back its output slightly in November, Saudi Arabia continued to pump more oil, averaging 11.3 mbd in the month. Meanwhile, Iran’s oil output fell by 0.5 mbd, to 2.85 mbd. 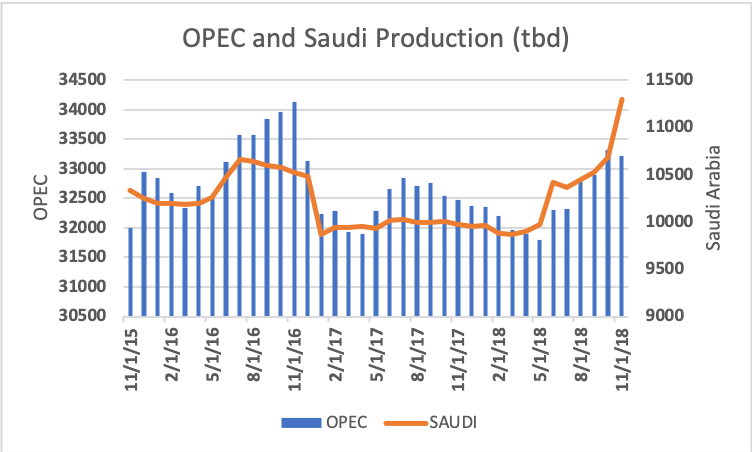 Geopolitical factors have overtaken market fundamentals in the past few months.

·      Sanctions on Iranian oil exports were supposed to come into effect on November 5th. However, in response to concerns over soaring oil prices and  pressures from key allies, the Trump administration extended 90-day waivers to eight countries who import Iranian oil, in effect allowing Iran to continue its oil exports, albeit at a reduced rate. This move, which caught other OPEC members by surprise, also infuriated the Saudis

·      The October 2nd killing of Adnan Khashoggi, a dissident Saudi journalist, by Saudi agents created a deep wedge between the United States and Saudi Arabia. The  U.S. intelligence agencies believe that the brutal killing of Khashoggi was most likely ordered by the Saudi Crown Prince, Mohammad ben Salman (aka MbS ) himself. While President Trump has chosen to give MbS a pass, the issue is not going away. In response, Saudis have sharply increased oil production (call it the Khashoggi effect) in an apparent effort to mollify the United States.

·      Despite efforts by the Trump administration to bury the Khashoggi affair, we are likely to see a bi-partisan effort on Capitol Hill to impose severe sanctions on Saudi Arabia, even to the point of curtailing  the massive weapons contracts. Furthermore, the U.S. Congress could take action to curtail U.S. support to the Saudi-United Arab Emirates coalition’s controversial war in Yemen. Such outcome would change the Saudi equation on oil and probably lead to cutback in Saudi oil shipments, and ultimately higher prices. 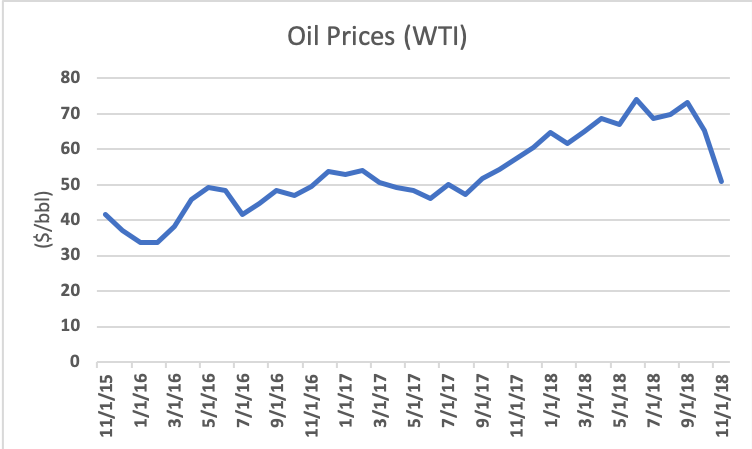 ·      Russia is also an important player, In the past two years, Russia (alongside 10 other non-OPEC oil producers) has coordinated output cuts with OPEC and the Saudis. In recent months, however, it also ramped up production, and has been hit by the fall in oil prices.  Broadly speaking, Russia and the Saudis agree on a (Brent) price floor of $60/bbl, with the Saudis preferring $70-80 dollars. At the same time, OPEC is under pressure from the Trump administration to keep oil prices low.

At their December 6 meeting, OPEC ministers are expected to agree to output cuts of at least 0.5 mbd.  However, OPEC and Russia would need to curtail output by at least 1.5 mbd to rebalance the markets.  Furthermore, the oil markets are expected to face weaker oil demand in 2019, reflecting slowing global growth, as well as rising U.S. production.  At the same time, geopolitical factors are expected to continue to keep the markets on a knife edge. Two questions in this regard. First, will the U.S. renew the Iran oil export waivers, and second, how will stresses in  the U.S.-Saudi relation impact oil markets.