We have another week of data on the US commercial banks’ assets and liabilities. Deposits rose by 2.6% in the week to 25th March, after a (revised) increase of 2.2% in the previous week. The increase in the fortnight to 25th March may have been the highest ever in such a short period of time. The implied annualised rate of increase was not much less than 250%.

In the attached note I discuss the macro background and prospect for money growth in the rest of 2020. April will see record Treasury bill issuance in the USA, with a very high proportion of the bills being taken up by the banking system (i.e., the Fed as well as the commercial banks). Because of the way that the American statisticians prepare monthly money data (with an average of weekly dates), it seems plausible to me that broad money/bank deposits will rise in April by 4% - 5%. (To clarify, this is a rise in one month. It is not the annual rate applicable to the month of April 2020.) I reiterate my view that 2020 may see the highest increase in the broadly-defined quantity of money in the USA in peacetime, and more generally, the policy response to the coronavirus pandemic will be followed by an inflationary boom.

Let me emphasize that this is not necessarily a criticism of policy-makers, although I do wonder if they understand what they are doing. Politicians have given priority to lives over livelihoods, which is to be expected in a democracy. Once that had been done, I don’t think central bankers, public debt managers and financial regulators had much choice. They couldn’t obstruct governments determined to save lives. 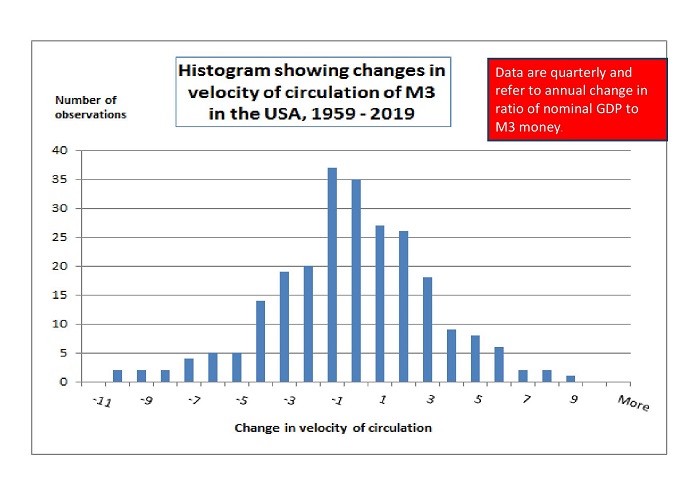 I am sometimes criticised for taking a too mechanical view of the relationship between changes in the quantity of money and changes in nominal GDP. My critics say that the velocity of circulation of money “goes all over the place”, or something of the sort. Above is a histogram of changes in the velocity of circulation of M3 in the USA going back to 1959. The series does not rule out the possibility that it is normally distributed, according to the Kolgomorov-Smirnoff test. Large changes in velocity do occur, but they are unusual; they tend to be ironed out over the medium term. (The middle quarters of 2020 will of course see a collapse in velocity, but next year and 2022 will see it return towards the 2019 level.) I leave the reader to make up his or her mind about whether we should be concerned, for the world’s largest economy, about the possible inflationary sequel to an annual money growth rate in the 15% - 20% band.

Andrew Bailey, governor of the Bank of England, has joined the debate with an article in the Financial Times. He is rightly determined to maintain public confidence in UK monetary policy. But there is not a single reference in his article to the quantity of money. In my career as an economic analyst, I have commented on a succession of Bank governors. Bailey needs to be told – like his predecessors – that the rate of increase in the UK price level depends on the rate of increase in the quantity of money relative to the rate of increase in the quantity of goods and services. I will be surprised if the current mix of policies is not accompanied, over the next few months, by an annual increase in M4x into the double digits; I will also be surprised if that does not lead to an inflation rate closer to 10% than we have seen for many years. We don’t yet know what the medium-term consequences will be. The high “inflation rate” may be a misnomer. The shock may be viewed as a one-off increase in the price level rather than as the onset of a more persistent inflationary malaise, with little effect on inflation expectations. I hope so. But – despite the anti-quantity-theory attitudes of its officials, particularly its deputy governors – the Bank of England will have to pay attention to money growth trends.